So my new Love Movement, Let Love Surprise You, has taken off and has been nothing less than amazing. So much perspective and underlying lessons involved, which I will share in a separate post. What has me writing today are the magical moments that have happened for the people involved. Serendipity at it’s finest.

1.an aptitude for making desirable discoveries by accident.

When I decided to start this movement, it was on the basis of trusting in the guidance of the Universe. When writing the letters, I connect with Spirit and I allow myself to become a channel in which divine words can come through. I try not to think too much with my brain, and let the words flow from my heart, leaving bits of my soul with them. When I leave the letters, I try to allow myself to be open to the places that call me. This process of writing and leaving, is one of trusting that I am creating a message and allowing that message to be found by the souls that need it in that moment.

Although others involved in this movement, may not have the exact same process as me when writing their letters, I also trust that the whisper they heard that urged them to be involved, is the same whisper that not only guides me but guides them through whichever process they choose and that THEY are involved to be a vessel just the same.
That being said, I just wanted to share about two moments that have made my heart flutter since this movement began. There are always signs available to lead us down the path of the Divine, signs showing us we are going the right way, or helping us find our way back. We get that proof, when we finally decide to pay attention.
Last week, a friend of mine had written a letter to leave… Here’s her story:

“So, yesterday I take my love letter and I go to M Street Coffeshop for the afternoon and wait for the right moment to drop it on a table outside the coffeeshop…I pop outside a couple of times and there are always people around so back inside I go, waiting for the right moment…When I finally leave, the tables have cleared and there’s not a soul outside, so I surreptitiously leave it on a table and then sit in my car for a few moments…I make a couple of phone calls quickly and then I decide it’s time to leave…so I turn my car round and as I do, these two sweet guys walk out of the coffee shop and get into a little Fiat parked right outside the coffee shop, next to the table where I left the letter, and what does their license plate say?!

So, of course I pull up next to them and make them wind down their window and I tell them about Let Love Surprise You and the Love Letter I just left on the table to help spread a little love…

She could have left the card earlier. She could have driven away right when she got in her car. She didn’t have to stop and talk to the men in the car. I mean think about, if she had chosen to do any one thing differently, she would have not seen that license plate, she wouldn’t have met those people, she would have not felt that serendipitous connection she felt with them and the process of her leaving the note. All of these “signs” were validation that everything happened perfectly as it should have, because she decided to listen to the whisper in her heart that let her know when the “right moment” was.

Another story I want to share was one I became aware of yesterday when someone who found a note contacted me. This is the first person that has contacted me about finding a note and this story made my heart skip a beat. She writes her story in her blog, Girl’s Gone Child, and every moment leading up to her finding the letter she found was truly a Divine experience. You can read the blog post in its entirety here, but I will quote the parts that touched me the most.

This woman was going on a road trip with her family from LA to San Francisco. During the beginning of the blog, they are deciding if they should take Highway 5 or Interstate 1.

The 1 (Pacific Coast Highway) was salve for my soul in my pre-baby days. The Henry Miller library was my second home. I befriended Magnus (who ran the place) and was allowed to sit in the back with all of the artifacts and write there. I purchased an original photo of Miller back in 2002, that hangs above my desk in my office. I met my former book agent at the Big Sur Writer’s Workshop, hosted by the Miller library where I work-shopped my second (unpublished book), The Envelope, a 340 page novel that focuses on the power of an anonymous, found letter.

I have only been back once—with Hal, the summer of 2004, weeks before Archer was conceived.

I had the same feeling then that I did all of those times before, the feeling of standing on the cusp of the unknown—the ocean stretching infinitely below as waves crashed and trees swayed and people crouched on the side of the same road, looking down and out and up and across and within. I wanted to feel that again. I wanted ALL OF US to feel that together.

When I explained to the kids that we were going to take this trip, I told them that we had two options for the drive.

‘We can go the five hour way, up the 5 freeway, which is a boring drive with no real views, or we can take the 1 which will be long and beautiful—with seals and views of the ocean from cliffs—one of the most scenic drive on the planet, perhaps… ‘

I went on to explain that I felt this choice was a metaphor for life and I asked them to think about it for a day, to think about what it means to choose the “fast, easy, uninspired path” as opposed to the “long, winding, treacherous BUT BEAUTIFUL one.”

I told them to decide for themselves but to remember that they will have many times in their lives when they will have to choose between EASY and DIFFICULT. And that difficult will almost always yield the most worthy experiences. No pressure, kids, but there are no shortcuts. You get what you pay for…

The next day it was unanimous. Archer and Fable both wanted to go the “beautiful way with the seals.” Maybe for me, maybe for themselves… or for another reason entirely. Whatever it was, we were set. Hal and I were in. Archer and Fable were in. Bo and Revi were down for whatever. Hal and I high fived.

The day before we left for San Francisco, I was warned that our plan to take the 101 to the 1 is too much for four kids.

It’s a long drive with lots of windy turns and few rest stops and dangerous views.

“The kids will get carsick.”

Every single person we talked to said the same thing. That it would take 7897892713 hours. That we were crazy to even try. That we should wait until the kids were older. That we could take the 5 up and cut over in Carmel…

“But we’d miss the seals if we did that! We’d miss Big Sur…”

“Maybe so but it will be a much easier drive…”

Easy is never going to be the point”

They then pull  over in Piedras Blancas to see the seals and make their way to Big Sur and The Napenthe.

The plan was to stop by the Miller Library in Big Sur and grab lunch at The Nepenthe but it’s 3:30 now and too late for both. We put our names on the reservation list for dinner instead.

We walk down to the cafe and wait.

I explain to the kids and anyone who will listen how significant The Nepenthe was to writers and artists through time… that years before Hal and I eloped I had big plans to someday get married here.

“This is where I want my ashes spread when I die.”……

Moments later, after deciding that we would rather get back on the road and find a restaurant that could seat us before dark, I notice a small piece of folded paper sticking out from one of the beams at the edge of the deck. Archer had just been standing beside it, his body framed by two umbrellas and, wait, what is that…

I pull the paper out from under the beam. It’s a letter.

A letter found at The Nepenthe in Big Sur, spitting distance from the place I wrote The Envelope almost thirteen years before. A book about an anonymous letter found on the street.

I read it to myself and then aloud. And then I think, “wait. Is someone fucking with me right now? This can’t be real. Is this real?”

(The kids and I will be writing anonymous letters and hiding them all over Los Angeles this year and hope you’ll join us. I mean, can you imagine if this really caught on? All that energy put out into the world? That’s power, man. What a concept.)

Thank you for your beautiful letter, Maya, wherever you are. The note lives in my wallet now — a reminder to keep on down the road and in your words “to stay myself.” And to, perhaps, revisit The Envelope some day. This year? Maybe so. Feels right. Feels like the signiest of signs… 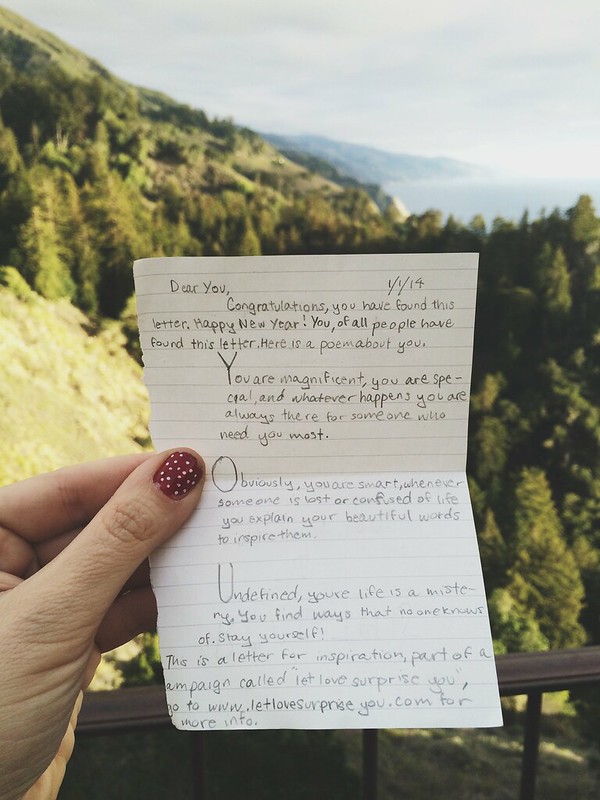 I mean WHATTTTTTTT?!?!?! I remind you this is the very first person to let me know they found a letter, the odds this woman is an awesome storyteller with an amazing story is unreal.

I mean think about it, what if they took Highway 5? What if they didn’t stop and see the seals for as long as they did? What if her son wasn’t standing where he was standing? I mean the odds that THIS woman’s adventure placed her exactly where she needed to be to find this letter, are beyond phenomenal. A woman that had written a book 13 years earlier called, The Envelope, which is about finding an anonymous letter on the street, near the exact place she wrote the book. I mean there are so many serendipitous things about this story I could go on forever. It completely trips me out!!!

At the same time, all I can really do it smile and laugh with my heart because I know that as unreal as it all seems, it’s so very real. It’s just yet another sign that I choose to pay attention to while taking the journey of starting this movement.

I almost didn’t start Let Love Surprise You because of fear, and it’s stories like these that affirm that this isn’t about ME. This isn’t about my ego. This isn’t about recognition or money or anything like that. This is about a love movement that existed in the realm of the Universe and I am just one of the many that decided to listen and be the vessel in which it could exist, exactly where I am during this time.

It is hearing and experiencing moments like the two above, that confirm the serendipity of the world. And although things may seem to be “by accident”, NOTHING is ever an accident. Everything takes place in perfect Divine timing. That’s really what this movement is about. Spreading Love and becoming a ONE with the world. Listen for the whispers and following your heart. LET LOVE SURPRISE YOU!!!